The final episode of POW! WOW! Daily is stacked with highlights!  Rauwkost Collective captured the chill vibes at the sunny Afrikaanderplein, where the big reveal of the La Karavana double decker went down. They’ve also managed to shoot footage of the magical moment of Thomas Buyse and Jorien Hofman getting engaged at our festival (cheers, love birds! 😍) and the process of 20 VANS 30 CANS!

We hope to see you all again next year!
Love, Team POW! WOW! Rotterdam 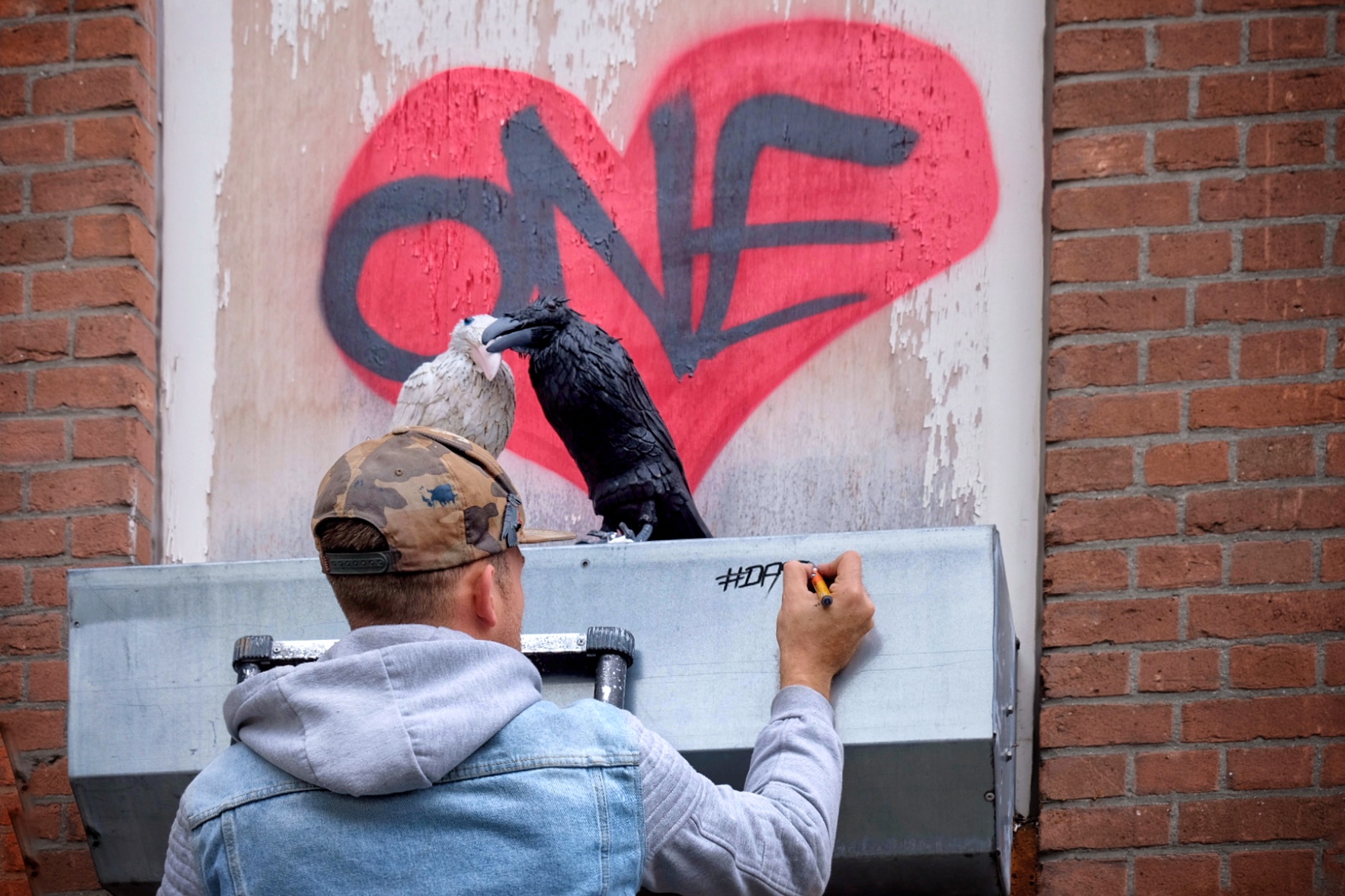 On Sunday September 13, street art festival POW! WOW! Rotterdam closed down a fantastic week with a successful final day in the Afrikaanderpark. Just like last year, twenty vehicles were painted during the popular 20 VANS 30 CANS event, while the park became the epicenter of a neighborhood full of new, evocative public art.

During the whole week, curious visitors and local residents walked through the neighborhood with the Rewriters010 app or the free  ‘POW! WOW! Passport’ as their guide, looking for artists who were providing the area with surprising murals. Styles ranged from a life-size space rocket, to playful typographic designs.

Because of the corona pandemic, the organization felt obliged to select a lineup consisting strictly of artists working and living in The Netherlands, but the festival confirmed that the level of domestic talent is high enough not to cause any concessions in quality. Those that stayed home, could follow along with the development of the murals and everything that happened at the festival through the POW! WOW! Daily; a daily video report broadcasted through the website social media.

Due to covid-19 there was no live music or dance stage, which meant that the focus was on the festival’s heart more than ever: street art. POW! WOW! Rotterdam marked several premiers: one of the artists created a ground painting on the football court at Hillekopplein, while the Putselaan was provided with a mural relief composed in cement layers. A playground in the Afrikaanderwijk was granted a partially open floor painting to be finished with colored chalk, which neighborhood children flocked to throughout the week. A double decker bus was also painted, and even one of the sky lifts was given a true makeover. During the final day, that machine lifted two lovebirds into the air, where one of them proposed marriage to the other. Of course she said yes!

And there were a lot more happy faces to be found in and around the Afrikaanderpark. Visitors had not felt something this close to the festival experience for quite a while. There were food trucks, music came from a soundsystem bike, and people were enjoying picknicks. The park provided ample space to respect social distancing, and visitors had no trouble following the health and safety guidelines. Right across from the pleasant park atmosphere, a selection of artists transformed two empty houses into a bonafide pop-up gallery.

POW! WOW! Rotterdam has proven that without an eventful side-programming, the heart of the festival remains strong enough to loudly beat on its own strength. A whole new wave of public art in the neighborhood was celebrated with visitors as well as local residents, in a pleasantly relaxed atmosphere. The many impressive and varied murals that the Afrikaanderwijk now contains, are an enduring reminder of those times, and a jewel for many years to come.

In the penultimate POW! WOW! Daily, we take a look at what goes into preparing the 20 VANS 30 CANS event during a pandemic, and how Rotterdam’s official city artist Erico Smit translates part of this remarkable year into art. His canvas is the tea house in the Afrikaanderpark, which he made into a six-frame animation to be played by walking around it.