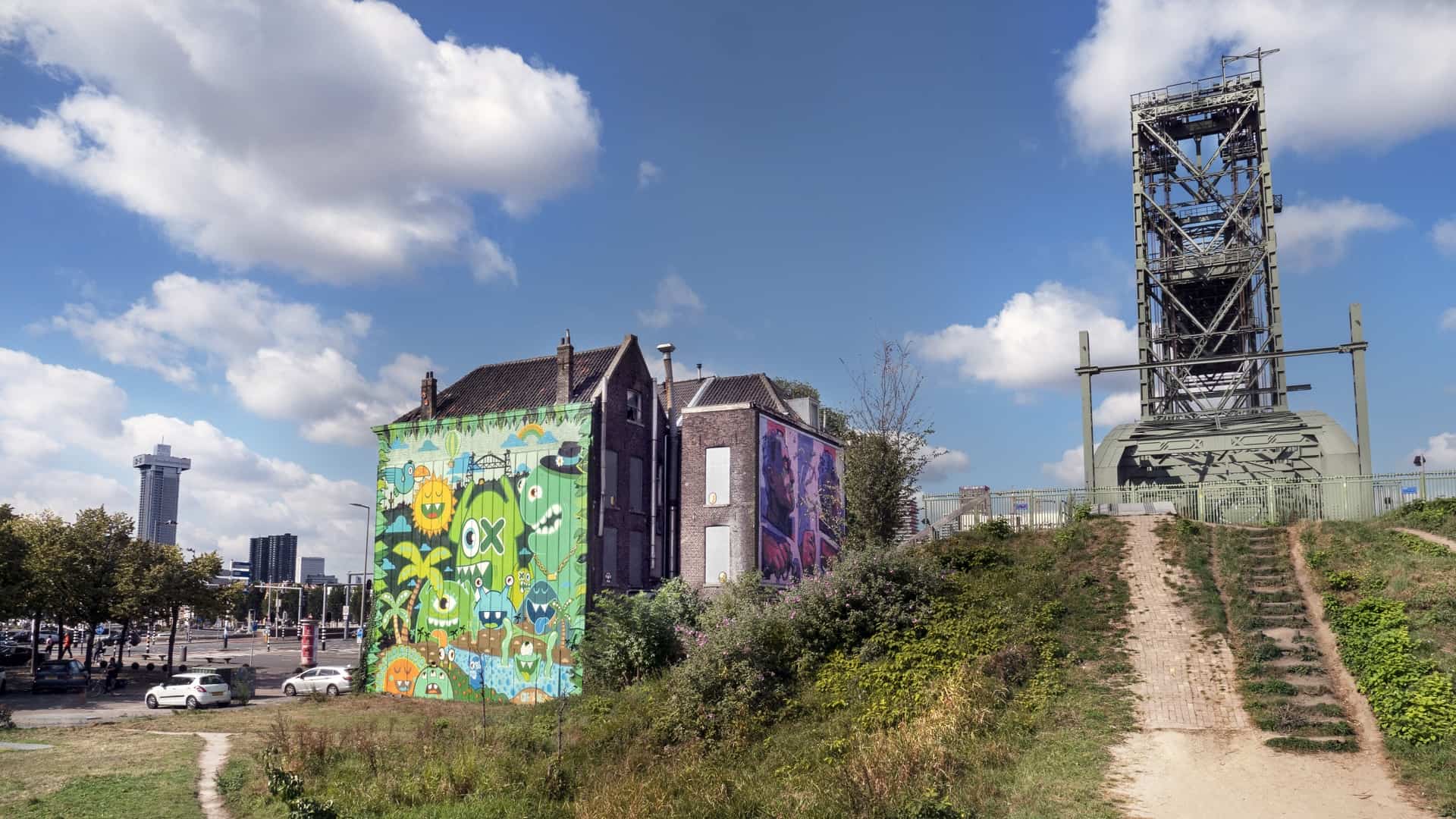 Want to have a nice walk through Rotterdam in the fall? The Rewriters app might be your new friend! It’ll guide you along all the works created during POW! WOW! Rotterdam 2021. There are murals commemorating to the neighborhood’s rich history, surprising international collaborations, and art that bridges the digital world with real life through augmented reality. We’re giving you a few highlights as a preview.

In the Oranjeboomstraat there were interesting projects with local youth and upcoming talent from the neighborhood, the results of which can be found through the app. Aside from all the art, you’ll also come across the monumental bridge know as De Hef, the charming Hefpark, which is maintained by neighborhood residents, and a lot of atmosphere tied to the famous football club that shares its name with the area. Put on your walking shoes and welcome to Feijenoord!

The Portugese-Polish duo Diogo Ruas and Jagoda Cierniak, better known as MOTS, were offered the wall on the side of the building at Stieltjesplein 2A as a canvas. Because this wall is directly within the shadows of monumental rail bridge De Hef, they decided to research the location. Doing so, they found the documentary The Last Bridgekeeper by Dirk Rijneke. The cinematic portrait of Arie de Weerd, who had been the bridgekeeper of De Hef for thirty years, moved them so strongly they wished to translate it to their style. In a comic book-like sequence, the bridgekeeper is operating the enormous steel construction that was part of his life for all those years with pride and dedication.

Their hommage did not only result in a beautiful, subdued painting, but also in an emotional meeting with De Weerd’s widow. Ruas and Cierniak strongly hoped she would recognize her husband in their stylized portrait, which turned out to absolutely be the case. “That forehead, it’s exactly him!”, she called out as she climbed the stairs next to it together with her daughter, much to the relief and appreciation of the artists.

‘Your Ego Is Not Your Amigo’, can be read from top to bottom in Anna T-Iron’s mural. The artist from the German city of Hamburg wrote her message in a variety of fonts, as a fresh collage echoing bits of modern pop culture. Anna partially worked with fluorescent paints, with a layer of regular paint underneath it. The fluorescent top layer changes in color as it is affected by sunlight over time, creating a new color mixture together with the bottom layer at each part of the process. What colors will eventually be visible as this happens, is hard to predict even for its creator.

This constant change, makes it a living painting with which she hopes to surprise both herself and her surrounding. The eventual shifting of colors can’t be steered by her any longer, which underscores the general message of the mural. By stating that your ego is not your friend, she wants to let people know it is okay to let go. The expectations and ambitions the ego sometimes places upon ourselves, are not necessarily the same things that make ourselves and the people around us happy. Sometimes it’s better to go with the flow, and see where life takes you.

‘Enjoy the Journey’ is the title of the work by British artist INSA straight across the Rotterdam Zuid train station. It doesn’t refer to a train ride however, but to life itself. “There’s one thing we all share, and that’s the fact our life eventually ends. So we might as well make the best out of it while it lasts”, the Brit explained. The cheerfully colored skulls spiral towards the inevitable disappearing point in the middle, symbolizing death as the great unifier.

The theme is even more clear when the mural is viewed through INSA’s free smartphone app GIF-ITI. The composition is designed in such a way that when tilted by a few degrees, every turn makes it a frame in an animation. The skull can be seen to drop from an opening in the top of the painting, tumbling downward toward the center. Op the GIF-ITI app, aim it at the mural from the platform at Rotterdam Zuid station, and the animation is revealed on the screen through ‘augmented reality’.

INSA often creates mural paintings that create an animation, often by repeatedly painting over the same wall, and taking a picture of each version to be used as frames in several seconds of animation. In 2014, he did so by painting over the ground in Rio De Janeiro and taking a photo of it with a satellite at a predetermined time once a day. INSA: “You create something physically, but it almost makes the mural a byproduct. The final artwork only exists digitally, in the ether. Nobody can ever claim ownership of it, and I really like that.”

This and an lot more can be found in the new route titled ‘Feijenoord’. If you’ve already purchased the app (€1,09 for iOS devices and €0,99 for Android), you can update it by pressing the ‘Update route’-button on the top left. If you run into any technical difficulties however, they may be solved by removing the app and downloading it again. You do not need to pay the price for purchase again to do do.

Want more info? Download the Rewriters app through App Store (for iOS devices) or Google Play (for Android devices). Future updates will remain to be provided for free.