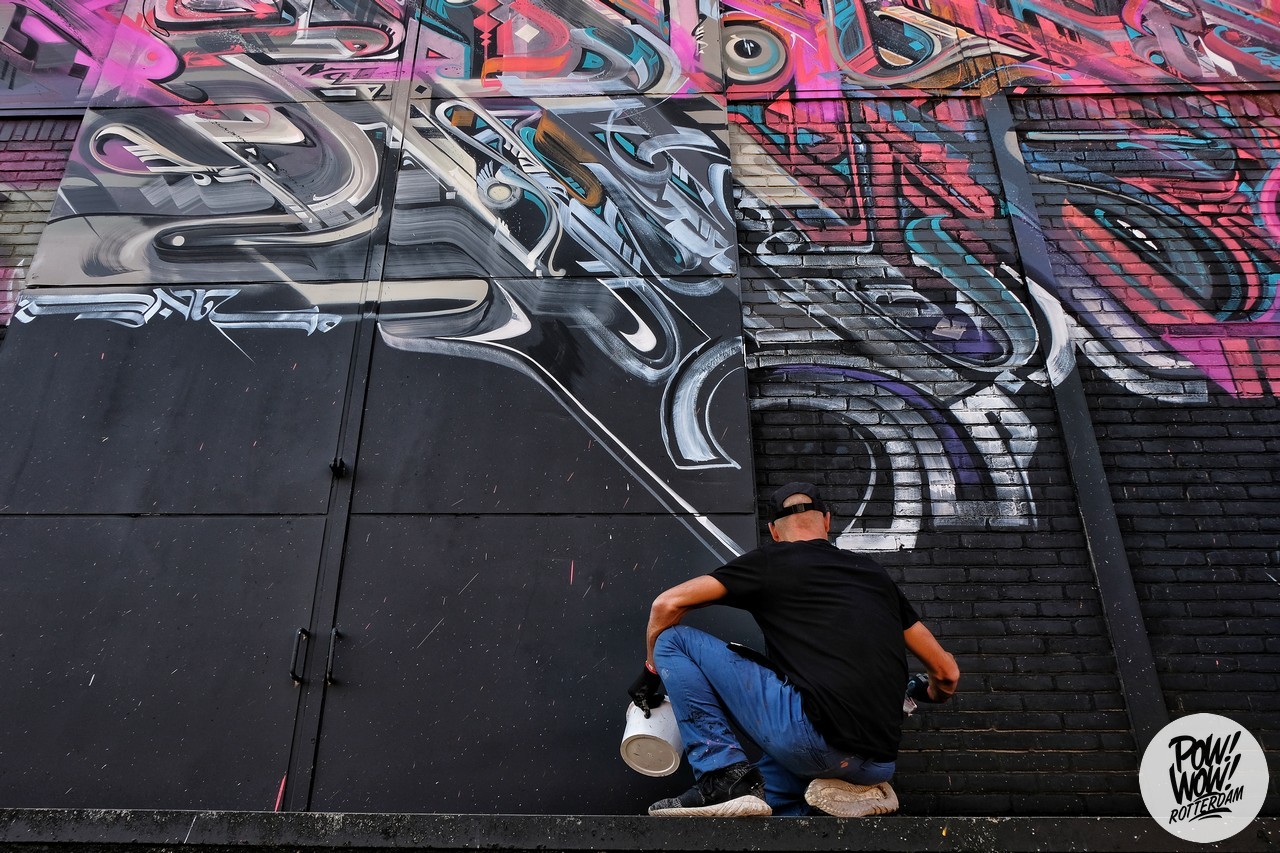 After a succesful first edition in the M4H area in 2018, POW! WOW! returns to Rotterdam on september 15, 2019. From the industrial around the old docks, we go to a blue collar neighborhood and cultural melting pot full of possibilities for amazing art: The Afrikaanderwijk. The worlds most famous street art festival began on the outskirts of Hawaii, transforming grim suburbs to a beloved open air gallery. The art didn’t just transform the walls, but also the way people felt about their own environment. After several succesful editions on the island, the festival expanded to other locations as well, such as Los Angeles, Taiwan, Hong Kong, Japan and Guam. “It really became a global street art phenomenon”, says Dave Vanderheijden, festival director of POW! WOW! Rotterdam. “Last year in the M4H area, we’ve organized the first European edition. Responses were so overwhelmingly positive, that we can’t wait to make sure we continue this positive trend towards the Afrikaanderwijk as well!”

“Last year in the M4H area, we’ve organized the first European edition. Responses were so overwhelmingly positive, that we can’t wait to make sure we continue this positive trend towards the Afrikaanderwijk as well!”

From grey concrete to colorful art

Several walls and buildings in the Afrikaanderwijk will form the canvas for a true street art transformation. Over 10 internationally renowned artists will be working in the neighborhood for a week, with the final results being revealed and celebrated during the festival on September 15. POW! WOW! Rotterdam will have many murals people can see being made, but there will be much more to enjoy. There will be live music, special exhibitions in a variety of buildings around the Afrikaanderwijk, the 20 VANS 30 CANS event, in which a series of vans will be painted by various artists, and much more. All festival activities in the Afrikaanderwijk can be attended for free, as we transform grey concrete and drab buildings into colorful art, which the neighborhood residents will be able to enjoy for years to come!

Artists from all over the world are coming to rotterdam

From the Afrikaanderplein, free guided tours will go around the neighborhood all day during the festival. We’ll walk the streets from mural to mural, where we’ll see internationally renowned artists working on their art. The Scottish artist SMUG will be among them, as will be the Dutch duo TELMO MIEL and the Hawaiian WOES. On September 15, a total of 50 artists will come to the Afrikaanderwijk, which will be given an entirely new look. But that’s not all!

Aside from the street art line-up, POW! WOW! Rotterdam hosts an array of amazing musicians that will be performing. The ambitious young rapper SNELLE, has proven through his already legendary 101Barz session full of smart lyrics to possess ‘more personality in his top lip’ than some of his competitors have in their entirety. ZWANGERE GUY, a.k.a. Gorik van Oudheusden, is one of the biggest artists in Belgian hiphop. His personal lyrics, combined with a dose of humor, ensure he is all set to conquer The Netherlands as well. And fellow Belgian COELY will also take the stage in the Afrikaanderwijk. After all the rave reviews her bold performance at North Sea Jazz garnered, we’ll be looking forward to welcoming her back to Rotterdam! The full musical line-up will be announced in the following weeks.