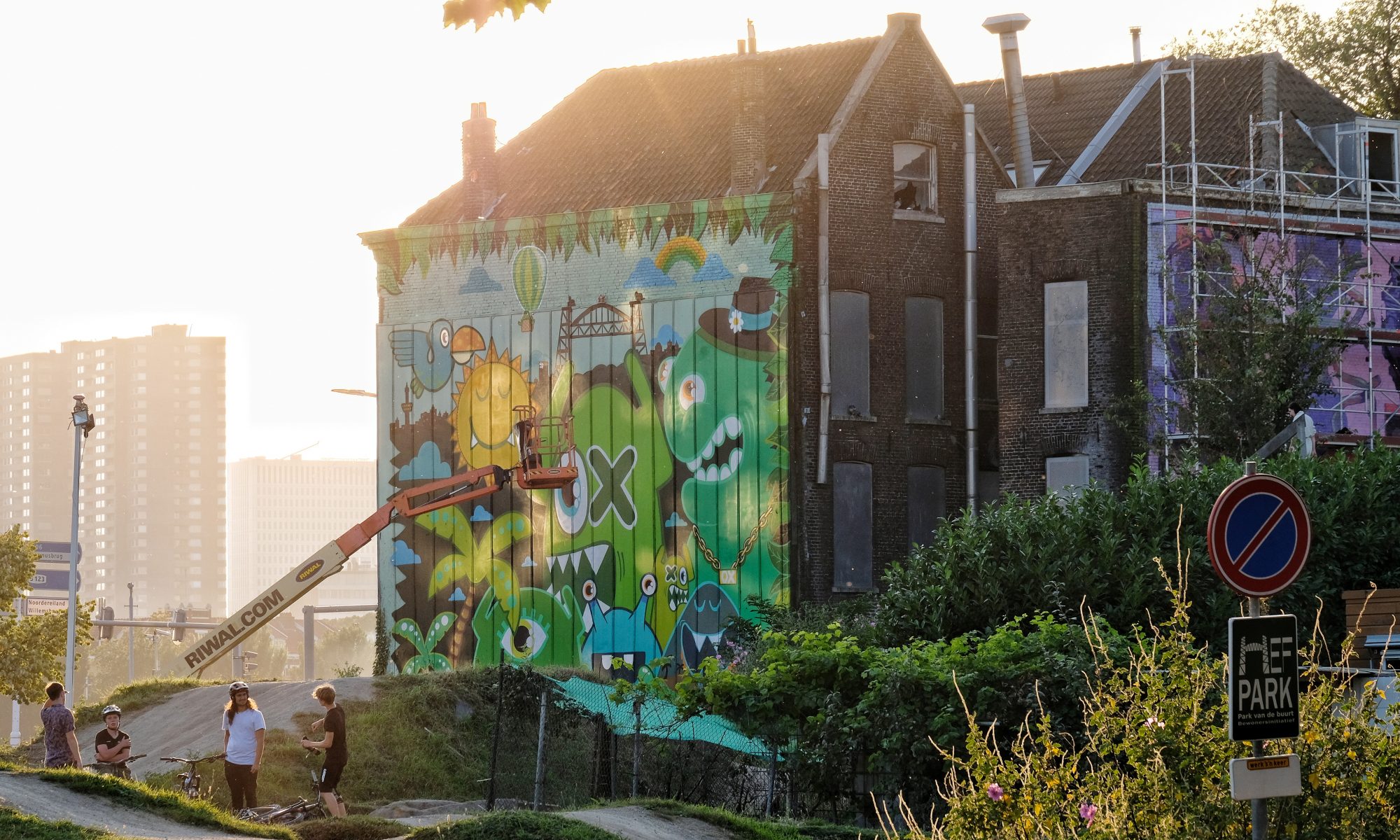 Organize a culture event, despite all the required security measures, where over 5000 visitors where able to safely enjoy art in the fresh outside air over the course of a week? With a lot of adjusting and a lot more team spirit, POW! WOW! Rotterdam proved that it could be done.

Throughout the week, a diverse group of artists from in- and outside The Netherlands came together in the Feijenoord neighborhood, to liven it up with public art. Muralists Andre HZS (The Netherlands ), Anna T-Iron (Germany), Engin Dogan (Germany), HALFSTUDIO (Portugal), Helen Proctor (Australia), INSA (England), MOTS (Portugal/Poland), NILS (USA), Ola Kalnins (Sweden), Ox-Alien (The Netherlands ), ROIDS (England) en Vandals On Holidays (Spain) created beautiful paintings that local residents and those visiting their streets can enjoy for many years to come. For seven days, guided bicycle tours rode along all these murals.

But they weren’t the only artists who left an impression. Swedish creator Johan Karlgren, also known as Pappas Pärlor, provided all passers-by with a smile on their faces. The inventive way in which his pixel-art installations incorporate their surroundings, where joyfully noticed by many, despite their characteristically modest size. The bricks in the corner of the entrance to a residential building that he turned in a bar through the addition of minuscule stools, glasses of beer and a plate of time tacos, was even noted be the world-renowned Mauritshuis. Karlgren’s minimalistic pixel version of the Girl with a Pearl Earring by Johannes Vermeer decorates the bar, and on the request of the museum that houses the original, Karlgren has now made them a rendition out of ironing-beads as well.

Aside from that POW! WOW! Rotterdam’s fourth edition also made room for its first sculptural exhibition. In one of the gas domes of the Mallegatpark, the Sculpture House could be visited for free for a whole week. This exhibition was curated by Rotterdam artist Onno Poiesz, and consisted of a variety of sculptures and installations by artists with a post-graffiti background, who, like Poiesz, have expanded their work into physical shapes. Just on its final day on Sunday September 12, it welcomed over 400 visitors.

That the many murals don’t just offer a break from they everyday routine, but can also give way to emotional depth, was proven by the Polish-Portugese duo consisting of Jagoda Cierniak and Diogo Ruas, better know by the artist name MOTS. After being offered to paint the wall on the side of the building at Stieltjesplein 2A, which is right next to the monumental former railway bridge called ‘De Hef’, they decided to do some research into this location. They soon came across the film The Last Bridgekeeper by Dirk Rijneke. The cinematic portrait of Arie de Weerd, who was the bridgekeeper during its final thirty years of it being operational, touched them so strongly they decided to try and translate its feel to their style of work. Their homage didn’t just result into a beautiful, subdued rendition of his likeness, but also in an emotional meeting with De Weerd’s widow, which moved all those involved.

Due to the safety measures mandated because of the pandemic, POW! WOW! Rotterdam 2021, just like last year’s edition, couldn’t wrap up with the additional festivities its first two editions offered. That thousands of Rotterdam people and visitors from far outside city limits still turned up to rejoice in all the public art Feijenoord had to offer on these beautiful late summer days, did more than ease that pain. On the final day, several spectacular vehicles were painted during VANS & CANS at the Afrikaanderplein, where the roots of street art were given room: graffiti. It once again confirmed the value of this art form, and made it a week to never forget.